“I want to say you’re are not alone. It will hopefully put a smile on someone’s face”

This Christmas, the online greeting card company, thortful, has partnered with Facebook community Postcards of Kindness to launch a range of postcards to encourage communities to reach out to each other at what can be a lonely and difficult time of year for many people – including the 225,000 people estimated to have been diagnosed with dementia this year.

The concepts were developed by people with dementia who are part of specialist charity Dementia Adventure’s Special Interest Group. Designers from thortful’s community of creators were then tasked to bring the A5 cards to life. The final creations are now available to distribute for 99p each via thortful’s website or app, with 100% of the profits being donated to Dementia Adventure.

Joy Watson, 61, is one of the four people who inspired the festive designs targeting the 850,000 people with dementia in the UK.

Having experienced symptoms in her forties, before being diagnosed at the age of just 55, she is passionate about helping people affected by the progressive illness to live as well as they can. Her postcard concept, entitled ‘A time for togetherness’, has been designed to evoke the spirit of Christmas, which for her is making time for each other.

Vivienne Depledge, CEO of Dementia Adventure, which hosts subsidised, fully supported dementia holidays and free Family Carer Events offering help and advice across the UK explained: “Many of us know someone affected by dementia, which can be a very isolating condition. After diagnosis, a third of people say that they have lost friends and their social lives decline.

“People can find themselves spending most of their time indoors and unable to take part in activities they once enjoyed. This dramatically affects their sense of purpose and well-being so we are delighted to be working alongside thortful as part of this campaign.

“We invited our advisory group of people living with dementia to have the opportunity to be involved in the design process. We would hope that these cards will encourage many people to reach out with messages of friendship and kindness this Christmas”

Grandfather James McKillop, 79, shares the sentiment that life continues with dementia. When he was diagnosed with vascular dementia in 1999, he was given a life expectancy of just six years. Twenty years later, the father of four is testament to a ‘can do’ attitude. His postcard design features a photo he took after his diagnosis of a snow-covered house, with the small warm light shining from within representing a beacon of hope. He said: “I want the viewer to be able to go out into the world and enjoy being alive. Let your talents, whatever they may be, flourish. I want them to say, ‘I can do that too’.”

‘Christmas memory markers’ is the design inspired by former healthcare manager, Howard Gordon, who was diagnosed with dementia at the age of 54 in 2017. Having worked in a care home, he saw the impact receiving cards had on lonely residents. He said, “I would urge as many people as possible to send one. Sadly, many people have no family or contact not just at Christmas. I want to say you’re not alone. It will hopefully put a smile on someone’s face.” 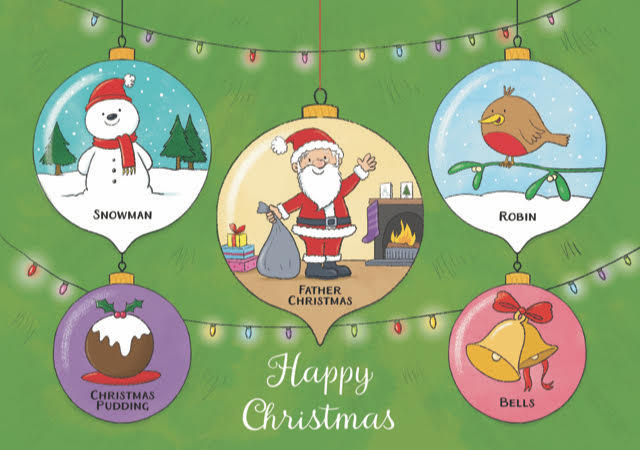 According to Alzheimer’s Society, 70% of people in care homes have dementia or severe memory problems. Victoria Weller, Managing Director of Your Health Limited and creator of the Postcards of Kindness project commented: “We are always looking for new ways to connect our residents with other people, and encourage their involvement in the wider community. I used to send cards to my nana about my adventures in-between visits to her when I was younger. I knew then just how much those cards meant to her and was so keen for our residents to experience the happiness triggered when we receive a handwritten card just for us.

“This year we wanted to share those memories and the anticipation of waiting for the postman with other care homes around the UK and beyond. We are so proud of the project and how far ithas reached and know that people will support us in sharing festive memories with our elderly community and care homes in the group.”

‘Merry & Bright’ (pictured at the top) is the postcard influenced by mum-of-three, Lorraine Brown, who experienced dementia symptoms in her late forties before being diagnosed at the age of 61 in 2014. She advocates remaining in touch with the person you are before diagnosis. For her, this means continuing to celebrate Yule rather than Christmas. She said: “There are so many different people with different beliefs, you’re still the same person when you’re diagnosed with dementia. I wanted to reach out to those not necessarily celebrating Christmas.”

Post Views: 7
Share
We use cookies to ensure that we give you the best experience on our website. If you continue to use this site we will assume that you are happy with it.OkRead more